As a fundamental unit of life, the cell is central to all of biology. Better understanding how complex cells evolved and work promises new revelations in areas as diverse as cancer research and developing new crop plants.

All complex life — including plants, animals and funji — is made up of eukaryotic cells, cells with a nucleus and other complex internal machinery used to perform the functions an organism needs to stay alive and healthy. Humans, for example, are composed of 220 different kinds of eukaryotic cells, which, working in groups, control everything from thinking and locomotion to reproduction and immune defense.

Thus, the origin of the eukaryotic cell is considered one of the most critical evolutionary events in the history of life on Earth. Had it not occurred sometime between 1.6 and 2 billion years ago, our planet would be a far different place, populated entirely by prokaryotes, single-celled organisms such as bacteria and archea.

For the most part, scientists agree that eukaryotic cells arose from a symbiotic relationship between bacteria and archaea. Archaea — which are similar to bacteria but have many molecular differences — and bacteria represent two of life’s three great domains. The third is represented by eukaryotes, organisms composed of the more complex eukaryotic cells.

Eukaryotic cells are characterized by an elaborate inner architecture. This includes, among other things, the cell nucleus, where genetic information in the form of DNA is housed within a double membrane; mitochondria, membrane-bound organelles, which provide the chemical energy a cell needs to function; and the endomembrane system, which is responsible for ferrying proteins and lipids about the cell.

“The current theory is widely accepted, but I would not say it is ‘established’ since nobody seems to have seriously considered alternative explanations,” explains WID Discovery Fellow, David Baum, a University of Wisconsin-Madison professor of botany and evolutionary biologist who, with his cousin, University College London cell biologist Buzz Baum, has formulated a new theory for how eukaryotic cells evolved. Known as the “inside-out” theory of eukaryotic cell evolution, the alternative view of how complex life came to be was published recently (Oct. 28, 2014) in the open access journal BMC Biology.

“It is refreshing to see people thinking about the cell holistically and based on how cells and organisms evolved.”

“The idea is tremendously simple,” says David Baum, who first began thinking about an alternate theory to explain the rise of the eukaryotic cell as an Oxford University undergraduate 30 years ago. “It is a radical rethinking, taking what we thought we knew (about the cell) and turning it inside-out.”
From time to time, David Baum dusted off his rudimentary idea and shared it with others, including the late Lynn Margulis, the American scientist who developed the theory of the origin of eukaryotic organelles. Over the past year, Buzz and David Baum refined and detailed their idea, which, like any good theory, makes predictions that are testable.

“First, the inside-out idea immediately suggested a steady stepwise path of evolution that required few cellular or molecular innovations. This is just what is required of an evolutionary model,” argues Buzz Baum, an expert on cell shape and structure. “Second, the model suggested a new way of looking at modern cells.”
Modern eukaryotic cells, says Buzz Baum, can be interrogated in the context of the new theory to answer many of their unexplained features, including why nuclear events appear to be inherited from archea while other features seem to be derived from the bacteria. 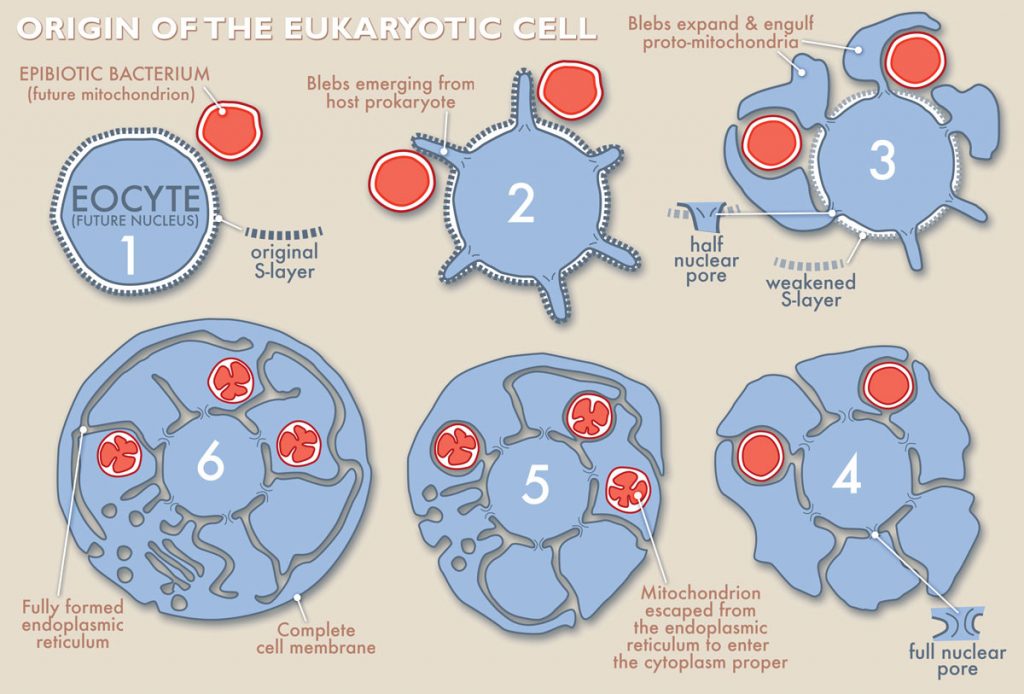 “It is refreshing to see people thinking about the cell holistically and based on how cells and organisms evolved,” says Ahna Skop, a UW-Madison professor of genetics and an expert on cell division. The idea is “logical and well thought out. I’ve already sent the paper to every cell biologist I know. It simply makes sense to be thinking about the cell and its contents in the context of where they may have come from.”

The way cells work when they divide, she notes, requires the interplay of molecules that have evolved over many millions of years to cut cells in two in the process of cell division. The same molecular functions, she argues, could be repurposed in a way that conforms to the theory advanced by the Baums. “Why spend the energy to remake something that was made thousands of years ago to pinch in a cell? The functions of these proteins just evolve and change as the organism’s structure and function change.”

Knowing more about how the eukaryotic cell came to be promises to aid biologists studying the fundamental properties of the cell, which, in turn, could one day fuel a better understanding of things like cancer, diabetes and other cell-based diseases; ageing; and the development of valuable new traits for important crop plants.

A potentially more fruitful avenue to explore, David Baum suggests, would be to look for intermediate forms of cells with some, but not all, of the features of a full-blown eukaryote. “The implication is that intermediates that did exist went extinct, most likely because of competition with fully-developed eukaryotes.”

However, with a more granular understanding of how complex cells evolved, it may be possible to identify living intermediates, says David Baum: “I do hold out hope that once we figure out how the eukaryotic tree is rooted, we might find a few eukaryotes that have intermediate traits.”

“This is a whole new take (on the eukaryotic cell), which I find fascinating,” notes UW-Madison biochemistry Professor Judith Kimble. “I have no idea if it is right or wrong, but they’ve done a good job of pulling in detail and providing testable hypotheses. That, in itself, is incredibly useful.”