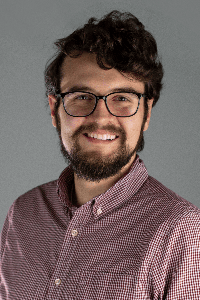 Aedan Gardill was born and raised right here in Madison, Wisconsin. Growing up, he was always interested in science and art, and in college at Lawrence University in Appleton, Wisconsin, began exploring the interdisciplinary connections between the two. Aedan received Bachelor of Arts degrees in both physics and art at Lawrence, and is continuing his study of physics as a graduate student at UW Madison. As a Kohler Fellow, he will be able to continue exploring the connections between art and science.

In my physics research, I study atom-sized defects in diamond called nitrogen-vacancy (NV) centers. NV centers are sensitive to their local environment's electric, magnetic, and temperature fields. Along with their excellent quantum properties at room temperature and the ability to place other material right on the diamond surface, NV centers make fantastic measurement tools. We plan to use the NV centers to precisely measure the electric and magnetic field noise on the surface of quantum computing devices, like quantum dots and superconducting qubits. In my art, I work in two-dimensions, focusing on painting and printmaking.For the past four years I have made art that examines the gender and racial inequalities still prevalent in the sciences. I want to combat the stereotype of the white, male scientist by increasing the visual representation of diverse scientists. My art advocates for underrepresented scientists by sharing the stories of their lives and research in an accessible format.