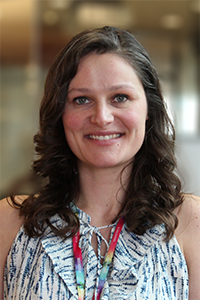 Responding to global health crises is a job for policymakers and scientists, but really it’s often microbes that call the shots.

Wisconsin Institute for Discovery (WID) postdoctoral associate Amanda Hurley has studied the inner workings of these microscopic bugs for the past decade and is prepared to bridge that knowledge with how policymakers communicate as she begins an American Association for the Advancement of Science (AAAS) Science and Technology Policy Fellowship in the U.S. Department of State.

Hurley will work in the Office of International Health and Biodefense (IHB)–housed in the Harry S. Truman Building–which builds global health security through policy advancement. Although it’s a major career shift from bench science, she is excited to use her expertise about how pathogens function and interact in the environment to craft effective national and international policy.

As a graduate student at Princeton University, Hurley studied the ways bacteria talk to members of their own species, a phenomenon known as quorum sensing. Since then, she’s taken her love of microbes and how they communicate to explore interspecies bacterial signalling with the model microbial community, The Hitchhikers of the Rhizosphere, or THOR.

Amanda is one of the best scientists I’ve worked with, and it’s great to see high quality science tapped for government positions.

Hurley was advised by Jo Handelsman, professor of plant pathology and Director of the Wisconsin Institute for Discovery. Using genetic screens to determine mechanisms of community phenotypes within THOR, Hurley has helped understand variably regulated genes in individual species versus the three-membered community.

Having worked in the federal government herself, Handelsman is eager to see Hurley transition to policy.

“Amanda is one of the best scientists I’ve worked with, and it’s great to see high quality science tapped for government positions,” Handelsman says.

Working in Handelsman’s lab not only opened the door to new scientific expertise for Hurley, but allowed her to explore policy, mentorship, and writing. After arriving at UW-Madison, she immediately joined Catalysts for Science Policy, a graduate student and postdoc organization focused on building policy skills, where she wrote and published non-technical pieces on topics outside of her postdoctoral research.

Handelsman has watched Hurley’s professional growth in action. “Amanda arrived a terrific scientist and during her time in WID has blossomed into a well-rounded professional with experience in teaching, outreach, leadership, and policy,” she says.

As an ambassador for eLife, Hurley sought to improve professional development resource access for early career researchers. Most recently, she has served on the Board of Directors for Future of Research where she is a member of the Labor Task Force, which uses data to improve working conditions for STEM graduate students and postdocs. This role helped prepare Hurley for her fellowship in the IHB.

“It has put me in a position that I know nothing about, and I’ve had to learn a lot about it,” she says. “That might be the perfect metaphor for my new position because I’m going to have to learn a lot very quickly.”

Working at WID allowed Hurley to explore the intersections between science and society, whether it was during scientific talks or studying genetic characteristics of antibiotic-producing soil bacteria for Tiny Earth. She thought about whether a person or government can own a microbe or its genetic information and expects ideas at the interaction of health security, pandemic preparedness, intellectual property, and international organizations will arise during her fellowship.

Particularly during a pandemic, “These conversations are really interesting and important to work out to ensure that resources get to people who need them,” says Hurley.

After an intense application process, Hurley was thrilled to match with an office that fits her interests. And though she will miss her biking commute through Madison’s arboretum, she’s looking forward to putting her knowledge of microbial and scientific communication to good use in Washington.