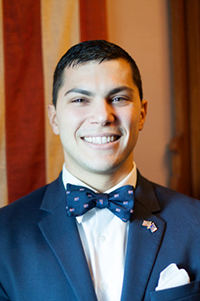 Born in Cleveland, Ohio, Andrew has lived in 14 cities across 9 different states in the U.S., and has spent time overseas while in the U.S. Air Force. Growing up in a working class family, Andrew learned the meaning of hard work at a young age, thus instilling a tenacious work ethic. His personality and open-mindedness can be attributed to the wonderful people who influenced him as he matured, such as his loving mother, and terrific teachers. These traits served him well in the Air Force as a Military Working Dog Handler, where each day he and his canine companion Beni would search for explosives. Andrew always had an interest in science and technology and chose to pursue an education in that field studying first at Arizona State University and later at Georgia Institute of Technology. Andrew's personal mission is: To bring awareness to, and explore solutions derived from, science and technology so to address the means of integrating such technological advancements for the amelioration of society.