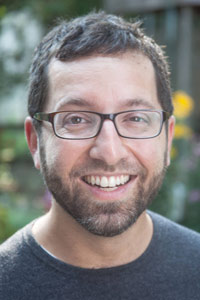 Jordan Ellenberg wrote a novel called The Grasshopper King, which came out in 2003 from Coffee House Press. Ellenberg also writes the “Do The Math” column in Slate, and has written articles on mathematical topics for The New York Times, The Washington Post, The Wall Street Journal, The Boston Globe, Wired and The Believer. Currently he is writing a book in the general vein of “mathematical ideas that are useful to people who don’t do math for a living,” called How Not To Be Wrong, which will be published by Penguin Press in 2014.

Ellenberg used to live in Princeton, NJ; a popular feature of his old web page was How to Eat Dinner in Princeton. Warning: this page is accurate only up to August 2005.

Jordan Ellenberg’s field is arithmetic algebraic geometry: specific interests include rational points on varieties, enumeration of number fields and other arithmetic objects, Galois representations attached to varieties and their fundamental groups, representation stability, the geometry of large data sets, non-abelian Iwasawa theory, pro-p group theory, automorphic forms, stable cohomology of moduli spaces, the complex of curves, Hilbert-Blumenthal abelian varieties, Q-curves, Serre’s conjecture, the ABC conjecture, and Diophantine problems related to all of the above. Ellenberg’s research here is partially supported by an NSF grant and a Romnes Faculty Fellowship. He is a co-organizer of the Wisconsin number theory seminar, the organizer of the interdisciplinary “Math And…” seminar, and PI on the NSF-RTG “Algebraic Geometry and Number Theory at the University of Wisconsin” grant.