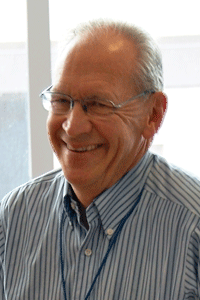 John Wiley served as the interim director of WID from 2008 to 2011, leading the public half of the public-private partnership in the Discovery Building.

Wiley was a graduate student in physics when he first came to the University of Wisconsin-Madison in 1964. He returned to campus a decade later, embarking on a more than 30-year career as a professor and administrator that has made a lasting impact on both the university and the state in the true spirit of the Wisconsin Idea.

Serving as the university’s chief executive officer for seven years, Wiley led UW-Madison through a period of major growth in diversity, infrastructure, research funding, access, and service-learning and study-abroad opportunities for students.

He is also a passionate supporter of the arts and strong advocate for a plan to create an East Campus arts corridor, including a pedestrian mall and an expanded Chazen Museum of Art. In less visible ways, Wiley’s enthusiasm for the arts has touched lives across the campus. He and his wife, Georgia, provide financial support for the UW Marching Band and contribute to the Wisconsin Youth Symphony Orchestra. Wiley also secured private funding to refurbish the university’s rare double keyboard Steinway piano and personally welded metal wine racks for art auctions benefiting Tandem Press, a self-supporting printmaking studio affiliated with the Department of Art.

Prior to serving as chancellor, Wiley was UW–Madison’s provost and vice chancellor for academic affairs from 1994 to 2000. In his role as the university’s chief operating officer and deputy chancellor, he worked closely with deans, faculty, academic staff and student committees in the exercise of shared governance and overall management of the institution.

Before becoming provost, he was dean of the Graduate School and the university’s senior research officer, and from 1986–89, he served as associate dean for research in the College of Engineering.

Wiley joined the UW–Madison faculty in the Department of Electrical and Computer Engineering in August 1975, beginning a productive career in teaching and research, which focused on topics related to semiconductors and other materials and processes important to the electronics field. He is a co-founder of several highly successful research centers, including the Center for X-ray Lithography and the Engineering Research Center for Plasma-Aided Manufacturing.

John Wiley has played a prominent role in national higher education administration, including chairing the Big Ten Council of Presidents and Chancellors in 2006. He chairs the board for the Council for Higher Education Accreditation and is a member of the National Security Higher Education Advisory Committee.

Wiley continues to represent the university before groups including alumni, chambers of commerce and service clubs, the state legislature and other governmental bodies, UW System Administration and the UW System Board of Regents.

He also serves on several local and community boards, including those for the William T. Evjue Foundation, the Greater Madison Chamber of Commerce, American Family Mutual Insurance Company, UW Hospital and Clinics Authority, the Wisconsin Alumni Research Foundation, University Research Park, Madison Symphony Orchestra, Venture Investors and BioPharmaceutical Technology Center Institute. Georgia Wiley serves on the board for the Friends of the Library.