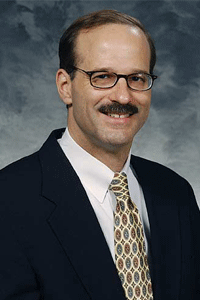 Christopher Demarco’s research interests center on nonlinear stability and control theory, with particular emphasis on applications in electric power systems. His work in this area has focused on a number of topics. The first was the problem of identifying region-of-attraction estimates in systems described by ordinary differential equations with algebraic constraints, sometimes referred to as “semi-implicit” systems, but only recently have received attention in the literature on direct methods of transient stability analysis. Region-of-attraction estimates have important practical application in determining the ability of a power system to recover from line faults, load disturbances , and loss of generation.  A second area of research in electric power systems involves illuminating the relationship between stability properties of deterministic models for the power system and exit-time statistics in a stochastic differential equation model having broad-band random disturbances in the load term. Using results from optimal control theory, Demarco has demonstrated a closed form expression for the so-called “quasi potential” function for the power system, and shown its relationship to a standard deterministic Lyapunov function. This result offers considerable promise in yielding practically implementable algorithms to indicate in real time the vulnerability of the power system to such phenomena as voltage collapse. A third area of his research that ties developments in modern control theory with power systems applications, is the topic of “robust stability.”A power system is a highly nonlinear system, whose operating point is continually changing in time. Demarco is extending results in robust control theory to obtain a means of guaranteeing stable operation of the system over a whole range of operating points, and examining the development of algorithms for application to large scale systems.