When most people press “print,” it’s usually a paper document or poster. But when WID researchers hit the print button, it might be for a gel to aid in understanding cancer or a tiny tool for assembling human tissues. They could also be printing artwork or an illustration of the latest in historical literary research.

The possibilities are endless with 3D printing, which is fast becoming a ubiquitous research tool at UW-Madison, thanks in large part to the Advanced Fabrication Laboratory, informally known as the “Fab Lab,” led by the Morgridge Institute for Research, WID’s partner in the Discovery Building.

“Collaboration with other departments gives you a new perspective to apply to future projects,” says Ben Cox, a Fab Lab graduate student who works closely with many of the researchers who use the 3D printers. “The more lenses through which you imagine the design, the better, simpler and more widely applicable the end result will be.”

We’re highlighting a few projects from WID researchers and collaborators that incorporate 3D printing into their discipline in a new way. Though this list is far from comprehensive, these four projects provide a glimpse of the revolutionary, unusual and downright cool ways 3D printing is influencing all types of research, from the humanities to the sciences.

When MFA student Paul Lorenz first encountered a 3D printing machine, he wasn’t especially impressed. Lorenz describes himself at the time as a “Luddite” who strongly preferred drawing and modeling by hand. Yet over time he watched his architectural school classmates print objects that would otherwise be impossible or impractical to construct, and Lorenz became preoccupied with the idea of physical creations informed — but not limited — by numerical data.

Lorenz, who is a recent recipient of a WID Emerging Interfaces award and a former Frontier Fellow, has used the Fab Lab printers to produce sculptures and installations that explore what can happen when data is divorced or abstracted from its context. One project, called “Information Study #4,” involved data mapping how Lorenz and his wife use certain spaces within their home for a range of mundane tasks. He then scaled the data and printed five sets of translucent “tendrils” that resemble intricate, complex icicles with the resin printer.

When lit, the tendril sets become an eerily beautiful display of data, but go beyond simply communicating the results of Lorenz’s mapping. There’s no meaningful key to the information, making it impossible to determine what’s being mapped just by looking at the piece.

“When I look at an infographic, I’ve noticed that data can be manipulated to an incredible degree that it becomes meaningless,” Lorenz says. “You can see that sure, there’s data going into this process, but it becomes so questionable.”

Lorenz’s extreme example of this idea takes advantage of the customizable capabilities of the printers. For another project, called “Stochastic Topophilia” (pictured above) Lorenz took U.S. Geological Survey topographical maps of the Smokey Mountains and ran them through an algorithm he wrote that calculates the likelihood of him personally enjoying a particular spot based on various characteristics of the place. For example, spots with a higher slope were more favorable, as were spots located within cavities along the sides of the mountains.

Lorenz then used a 3D printer to create a sheet with holes that served as representations of the spots he’d most likely enjoy. When Lorenz integrated the sheet into a sculpture of the mountains themselves, the result became an idiosyncratic map that combines data with unique human experience.

In addition to his own work, Lorenz is also committed to helping other artists experiment with 3D printing. As the instructor of record for an intro level art class, he guides undergraduate students on how to create designs for 3D printers.

“There’s something that 3D printing can really effectively articulate in a way that other processes are much harder to get at,” he says. “Since information is really just a series of numbers, it could be articulated into really, anything.” 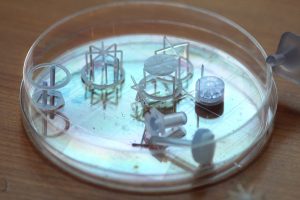 Scientists in WID’s BIONATES research area work on creating scaffolds that stem cells can grow on to form body tissues and organs. Though the group has successfully used water-based gels as a foundation for tissue scaffolds, researchers have learned that stem cells need a vascular system that mimics what’s found in the human body in order to form tissues of a significant size.

For humans, the vascular system includes your veins, arteries and capillaries — the conduits that carry oxygen and other nutrients to cells, as well as remove cell waste. In petri dishes without a vascular system, cells deep within these hydrogel scaffolds die rather than develop.

This is where 3D printing has helped Jason McNulty, a graduate student who works in the lab of BIONATES researcher Randy Ashton. McNulty has used the Fab Lab 3D printers to create a mold (pictured above) that looks roughly like a grooved thimble and could be pressed into a hydrogel to imprint a grid-like vascular system pattern. When researchers pull out the mold and a tiny basket-like tool that guides the mold into the gel, a “well” is left behind, which could help to spatially organize the cells.

Though the search continues for a more biocompatible material to continue experimenting with this technique, McNulty and his colleagues are shifting their attention to a bigger challenge: creating a new type of 3D printer that could extrude a patterned hydrogel and stem cells together. Doing this could allow for better precision in terms of placing cells along a particular pattern in the hydrogel, which would eliminate the need for molds altogether.

“In theory then, you could print a gel and seed it with cells in these capillary bed formations,” says McNulty. “You could essentially print a vascular system and put it directly into use in a tissue or organ.”

Studying the literary past through new eyes Carrie Roy and colleagues created inkwells to showcase findings from an analysis of Victorian-era literature.

Critics often lament that the world of social media is negatively affecting our use of language by encouraging short “Tweetable” words and sentences. However, English-language writers have been simplifying their vocabulary for much longer than the digital age. In fact, it’s a trend that dates back more than 200 years.

Humanities Research Bridge postdoctoral researcher and WID Living Environments Laboratory collaborator Carrie Roy, along with her colleagues Catherine DeRose from the Department of English and Fred Boehm from the Department of Statistics, analyzed 250 Victorian-era novels to answer a variety of questions about how the use of vocabulary shifted between the late 1830s and early 1900s.

The results suggest that authors used longer words in the early decades of the 1800s and much shorter words by the end of the century. The team believes this shift in word length mirrored the shift in reading audiences from a small group of elites to the masses over time. Though humanities researchers had previously noted these changes in Victorian readership, few studies have considered how language used in novels changed as well.

3D printing has offered a unique way to present other insights gleaned by Roy and colleagues. For instance, the team looked at 20 works by male Victorian authors and 20 works by female authors, pulling out all the words used exclusively by one group or the other.

The group compared how sources of inspiration differed by gender, representing that information through 3D-printed “his” and “her” inkwells (seen above) with walls made of the most popular words used by each gender. For example, Mary Shelley used the word “eyes” more than 120 times in Frankenstein. She also relied heavily on descriptions of expressive features, such as the face and hands.

“3D printing offered a way to play around with the text, to directly incorporate those words into a physical object that people could experience it firsthand,” Roy says. “Being able to ‘read the numbers’ is a powerful component of what we’re doing here.”

For Roy, the projects are an opportunity for the worlds of art, humanities and technology to inform each other. These custom inkwells have pushed the boundaries of 3D printing capabilities by creating very tiny physical words. Roy, DeRose and Boehm are a part of a growing community that expands the frontier for humanities scholars by using computational tools to ask new questions.

“Humanities data is really complex data,” Roy says. “Any opportunity to explore these complexities and think about our approaches, what it’s telling us and not telling us, is valuable for all scientists and humanists to tackle those challenges.” 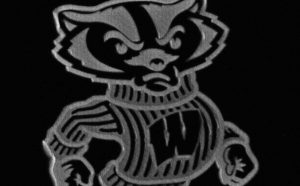 Kevin Eliceiri and others are finding ways to control collagen growth. For fun, the team created the university’s mascot Bucky Badger out of collagen several microns across.

Take breast cancer, for instance. Eliceiri, who directs the UW-Madison Laboratory for Optical and Computational Instrumentation (LOCI), says breast density is one of the greatest risk factors for breast cancer, and researchers have determined that collagen is a major component of the breast tissue classified as “dense.” When cancer cells that are aggregated in a tumor mass receive signaling cues, the collagen fibers around the tumor will sometimes realign, forming a kind of cellular highway that helps the cancer metastasize.

While researchers are beginning to see these processes happening under the microscope, they still don’t know exactly how the process works or what prompts the cells to start migrating. Working with leader of the Fabrication Lab, Rock Mackie, Eliceiri is working on new ways to visualize cell behavior. He says the key is developing new techniques for watching cells function in their natural habitat.

“If you want to understand my behavior, one way to do it is to make an artificial house for me. And you might put me into that 3D environment with a TV and a sofa — things for me to interact with,” Eliceiri says. “The same thing is true for cells. We can give them a more realistic cell playground in 3D, and there’s been a lot of evidence that this matters. Cancer cells behave differently in 3D than in 2D.”

These contexts are called microenvironments, and Eliceiri, along with Paul Campagnola, a professor of biomedical engineering, is developing a prototype for a biological 3D printer that could produce cell microenvironments in the form of customized 3D scaffolds or matrices, and advanced imaging methods to characterize the cells’ behavior.

Collaborating with Molecular Biology Professor Patricia Keely on the role of collagen in breast cancer, the team aims to produce a collagen-based matrix. Within the matrix, researchers could arrange — and print — the collagen fibers in particular ways to understand what configurations prompt cells to move.

Currently Eliceiri, Campagnola and their LOCI colleagues are working to increase the number of biological components the prototype can print as well as resolution of the components. They’re also exploring ways to integrate 3D in vivo imaging into the workflow so that researchers could print based on 3D images of real cell environments rather than simply print models based on models.