There is a new field of inquiry at the Wisconsin Institute for Discovery this summer. The materials in this lab aren’t bio or nano; they are muslin, linen and cotton.  There is warp but it has very little if anything to do with speed.  As a matter of fact, the pace in the room is measured and rhythmic. In spite of these differences, the researchers are every bit as intent on the process and product as any wet lab researcher in the building.

Marianne Fairbanks, Assistant Professor in the Design Studies Department at the UW–Madison School of Human Ecology (SoHE), along with graduate student, Liz Kozik, and undergraduate student, Christie Suchomel have temporarily converted Lynda Barry’s Image Lab to the Weaving Lab: Plain Cloth Productions. This lab of five looms warped with simple yarns will serve as a site of textile production and exploration of the creation of simple cloth.

Fairbanks is interested in studying pre and post-industrial textile technology. The reality that the floor loom is all but defunct led her to consider the southern traditions of weaving. In the 1880’s, The Fireside Industries, a craft school at Berea College, encouraged women to weave from home and sell their items through Berea College’s networks. Earnings were credited toward their tuition. It was a way for young women to “earn as they learn”. Fairbanks finds production in relationship to education quite interesting. The idea of putting the floor loom to work as a site of production and studying production at a local scale is the theme of the Weaving Lab.

But weaving’s history goes back much further: weaving is one of the earth’s oldest technologies. Evidence of the practice has been found in the Neolithic Era and recent archeological discoveries point to a possible Paleolithic origin.

Weaving is also connected to other modern technologies in unexpected ways. In the early 19th century, Joseph Marie Jacquard, a French weaver and merchant, developed a loom controlled by a series of punched cards to direct the warp (vertical) yarns in a loom to go up or down for each (horizontal) row. The binary concepts were eventually applied to programmable machines, and the earliest IBM compiler was founded on this technique.

No stranger to technology, Fairbanks is excited to be among WID researchers. She recently shared an exhibition at SoHE with the Living Environment Lab’s Kevin Ponto. Currently she is also collaborating with chemist Trisha Andrew to create a solar textile. Being located in the Discovery Building is really important to Fairbanks because she wants passerby traffic, scientists walking in the door, and school groups coming through. She finds the contrast of the building’s cool glass and limestone makes the warm wooden looms look even more archaic than their actual age.

Through August 25th while the Weaving Lab is in residence, Fairbanks intends to explore five main questions.

How many yards of plain weave cotton cloth can be woven on a floor loom?

Can you weave an entire bolt of cloth on a floor loom? The lab will study time, efficiency, and labor. They will question the loom as a tool, the weaver as a site of production, and the weaver’s body in relationship to the loom.

How long does it take to weave a yard of simple cloth for an amateur or expert?

The weaving lab currently has a display of five “hour towels”. Suchomel created each of them within a sixty-minute timespan but under varying conditions: listening to different kinds of music, being interrupted, or having to reload the shuttle with more yarn. All the towels are different lengths and the assorted conditions are documented on the front of each one. As different people use the looms, the diverse collection is expected to grow.

Going forward, Fairbanks plans to create “album towels”. “We’re going to take albums that are about an hour long and assign each towel to that album”, Fairbanks said. “I feel like it (music and production) is so connected. I want to now be more specific about it. Being old school, I like the idea of [listening to] an album from beginning to end.”

What meditational value does the act of weaving provide when not tied to production but just as an act of creation?

There is a rhythm to weaving that lends itself to meditation. Fairbanks describes it as ‘you get into a sort of rhythm or a flow and you forget’. She wants to discover what the mind is able to think about when it’s in a sequence of ‘doing’.

How can we explore and invent weave patterns based in math structures?

Fairbanks really wants to reveal the numbers and the structures that are involved in weaving. The loom is a binary instrument. It the warp is either up or down. She wants to create connections between people entering data and thinking about the binary codes that they are entering.

Can simple garments be woven that need little sewing and create little waste?

The lab will explore the production values of weaving garments with built in neck holes, buttonholes or selvedges to create the least amount of waste.

“Let’s keep our hands busy in a different way – have them making.”

The Weaving Lab will host an open house tonight from 4pm until 6pm in the Image Lab in the northwest corner of the Discovery Building. Although people are encouraged to stop by the Lab whenever the door is open, it will be open to the public every Monday through Thursday from 9am-4pm with a daily program at 1pm demonstrating how a floor loom works and weaving on the demo warp. After the program, visitors are welcome to volunteer to be a production weaver for the lab. There is a sign up sheet and lab members are happy to provide more information or a volunteer may contact Marianne Fairbanks directly. The volunteers will not create new projects to take home, but will add to the research already being done.

As a memento, all visitors will be given a small tapestry loom Fairbanks created on a laser cutter. The kit includes the loom, a needle for weaving and a comb for pushing the rows together (to “beat in the weft” as weavers would say). She created two varieties: one the shape and size of a postcard and another the shape and size of an iPhone. Fairbanks explained, “I thought this is something we’re very familiar with having in our hands, let’s keep our hands busy in a different way – have them making.” 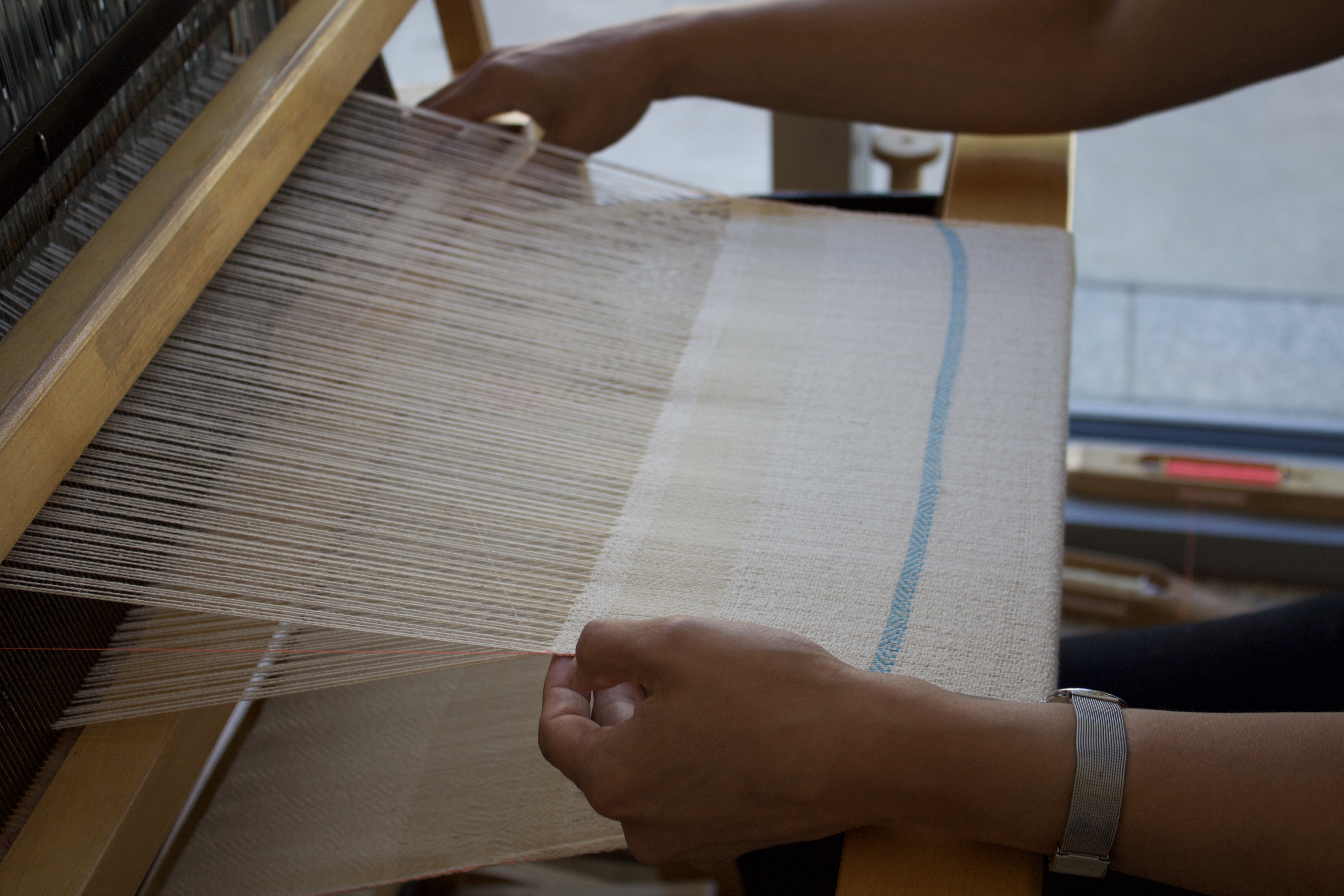 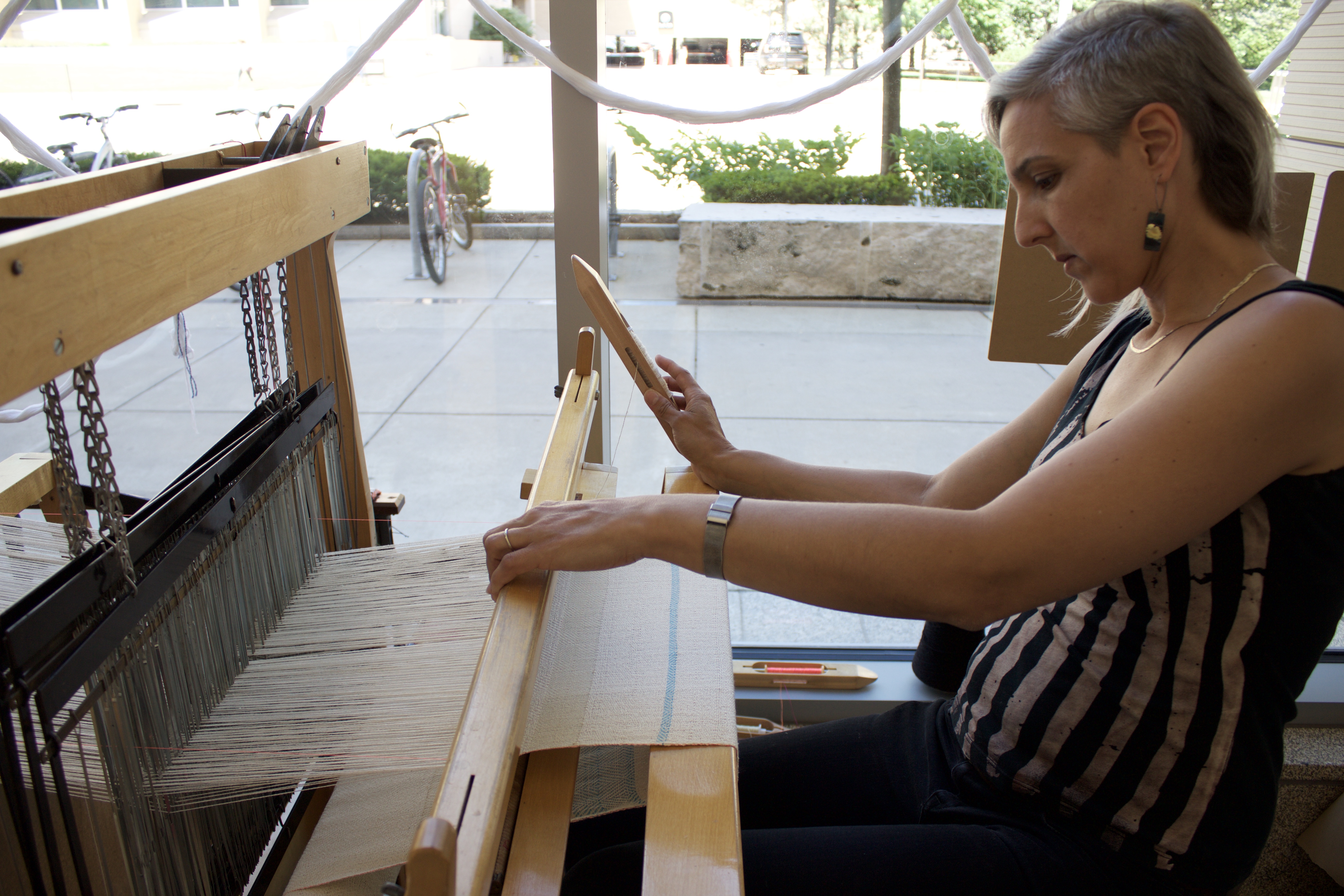 Beating in the weft 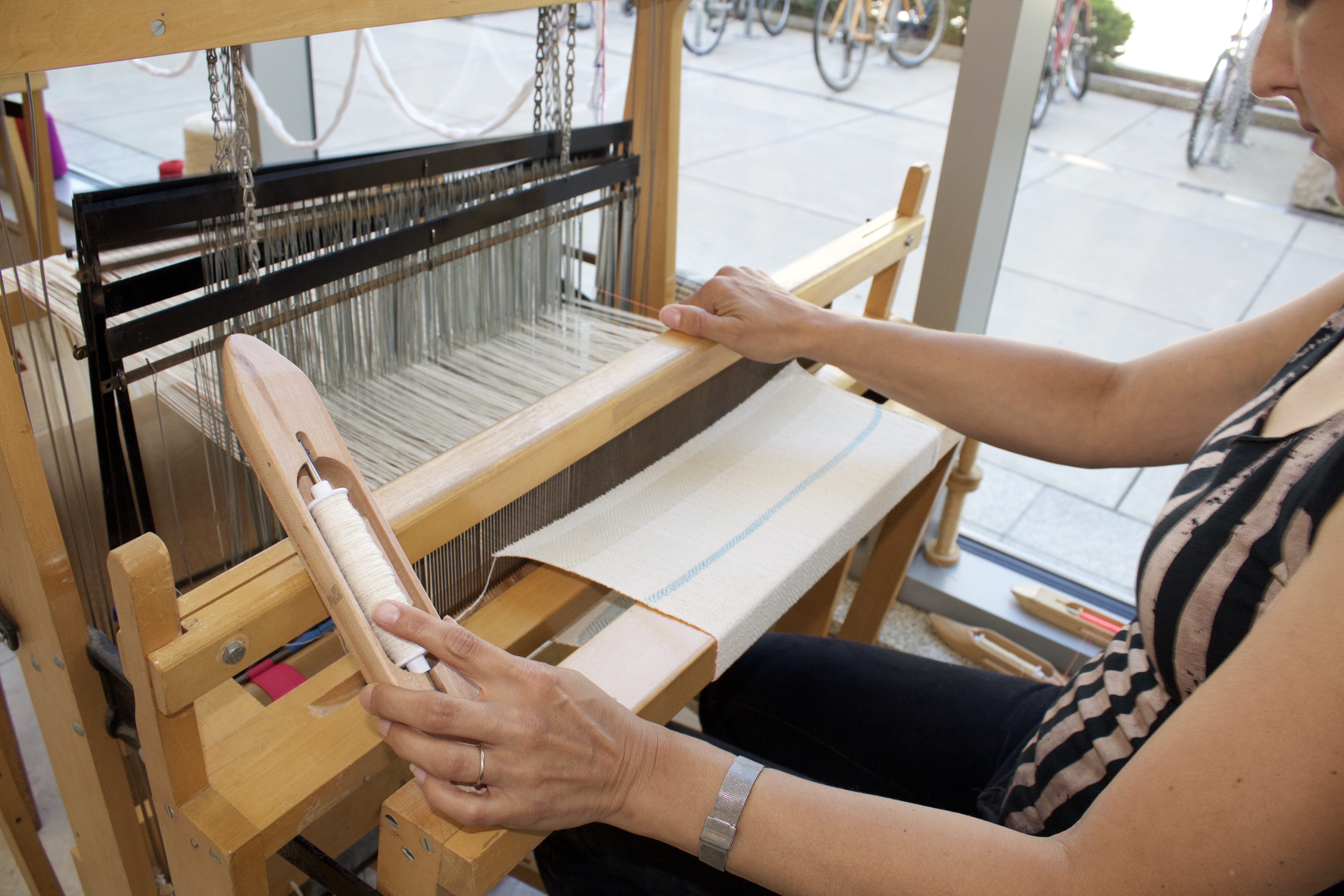 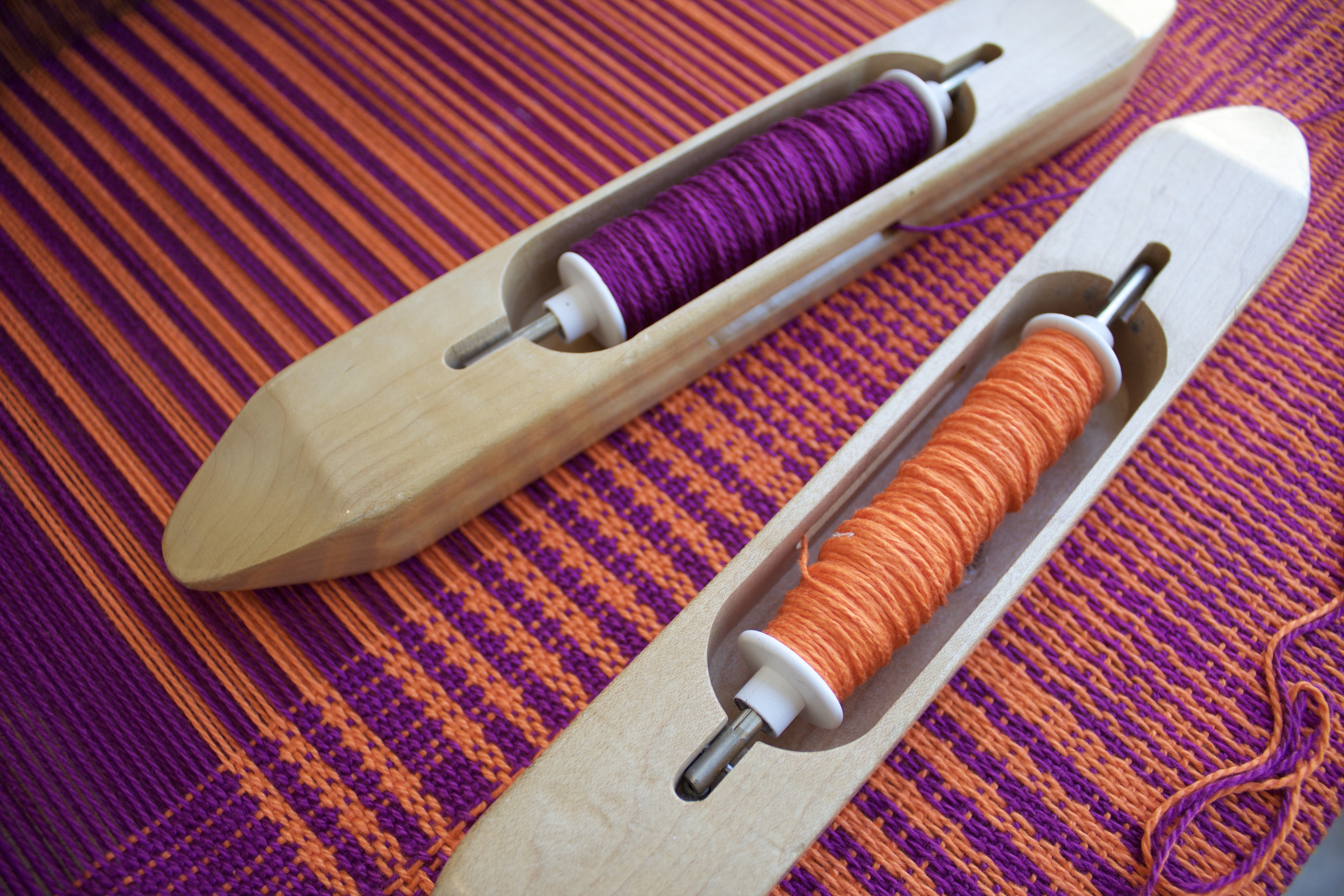 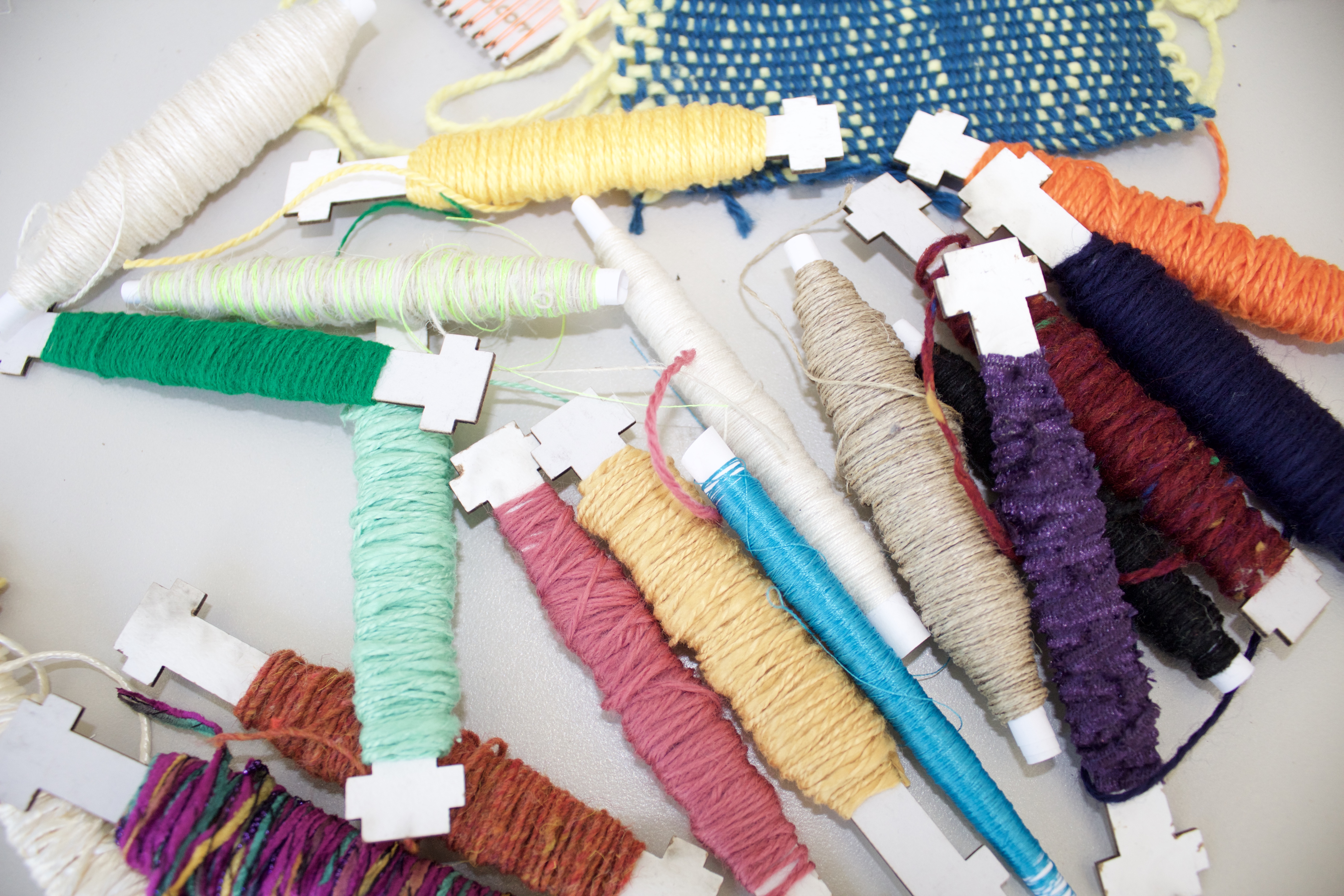 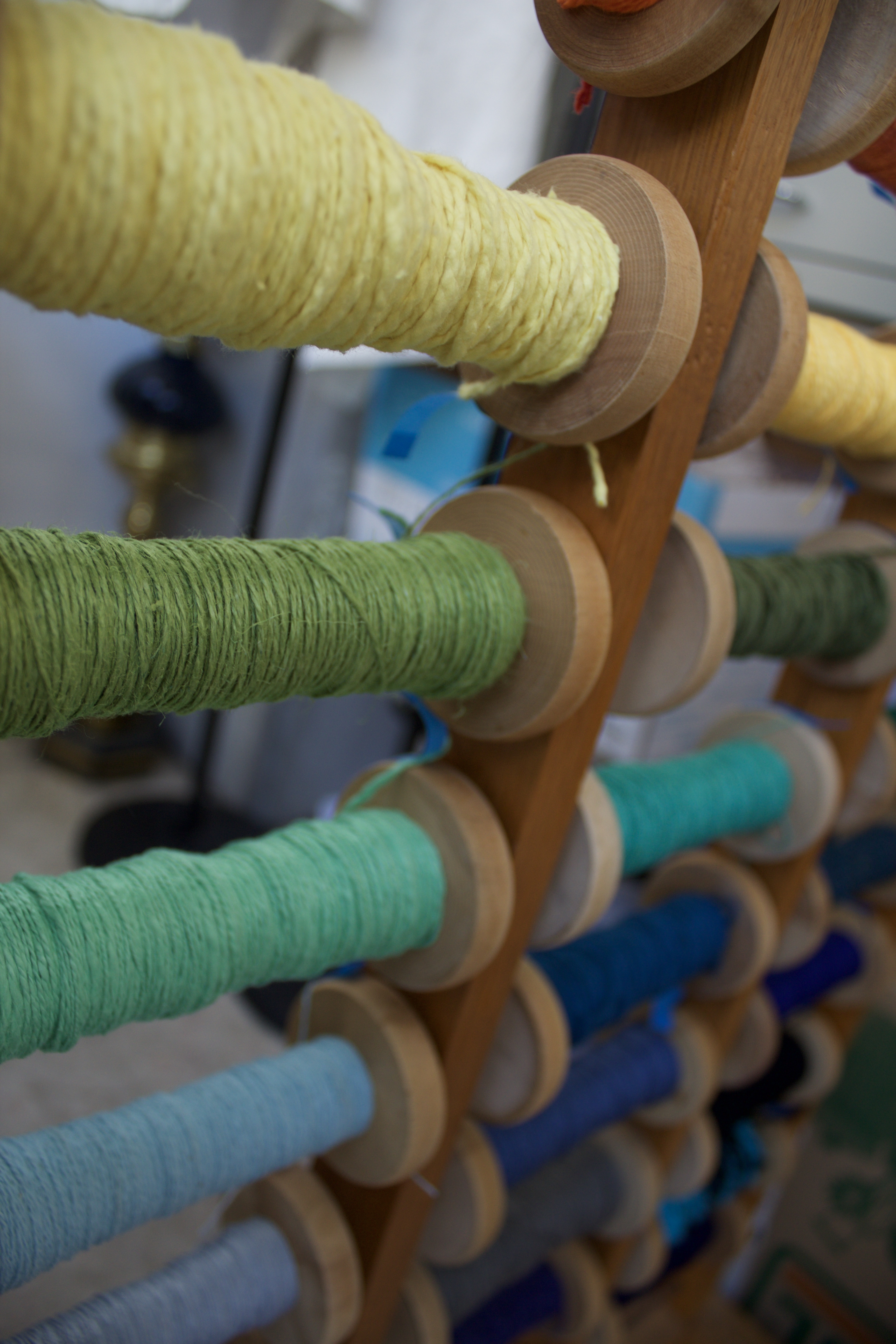 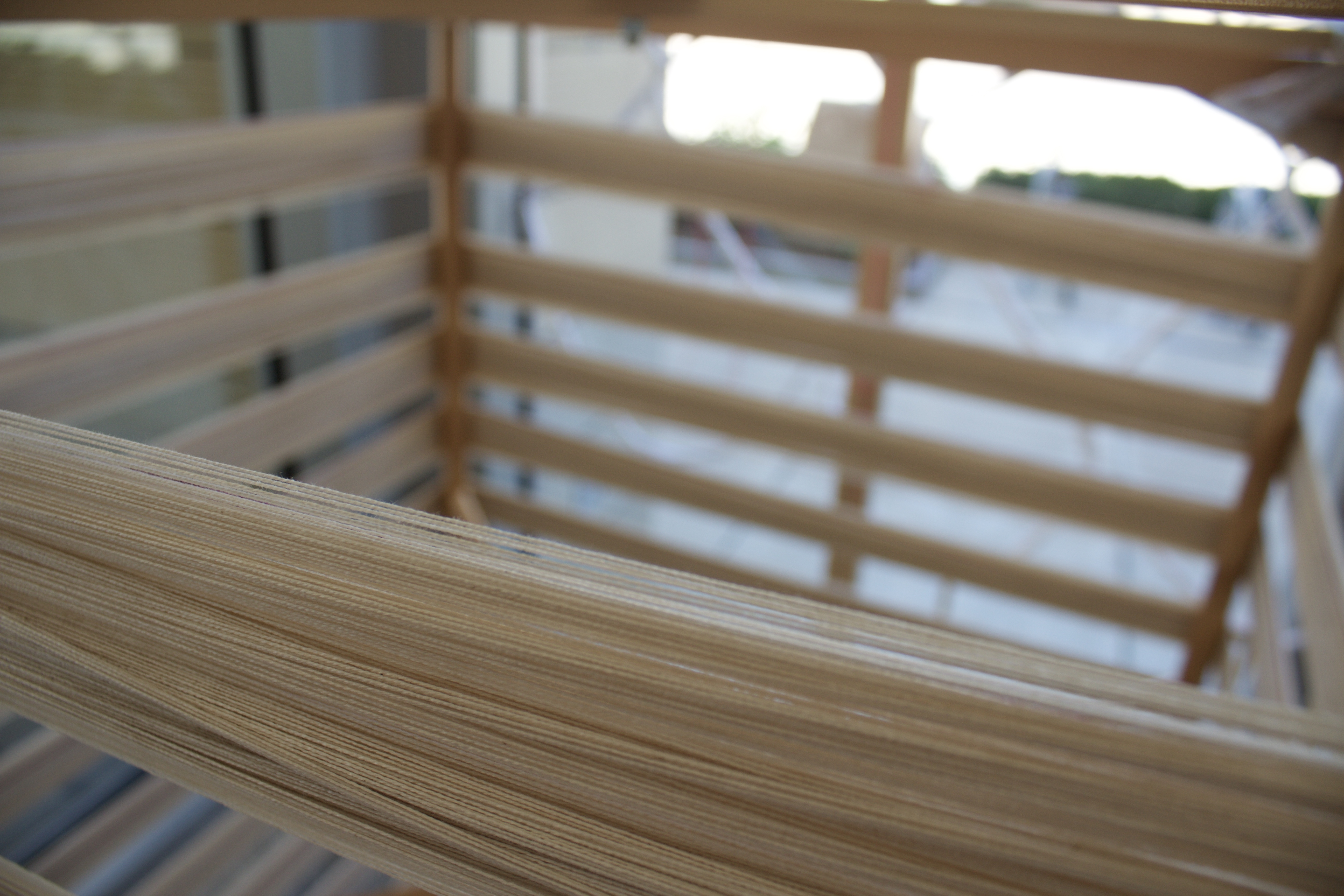 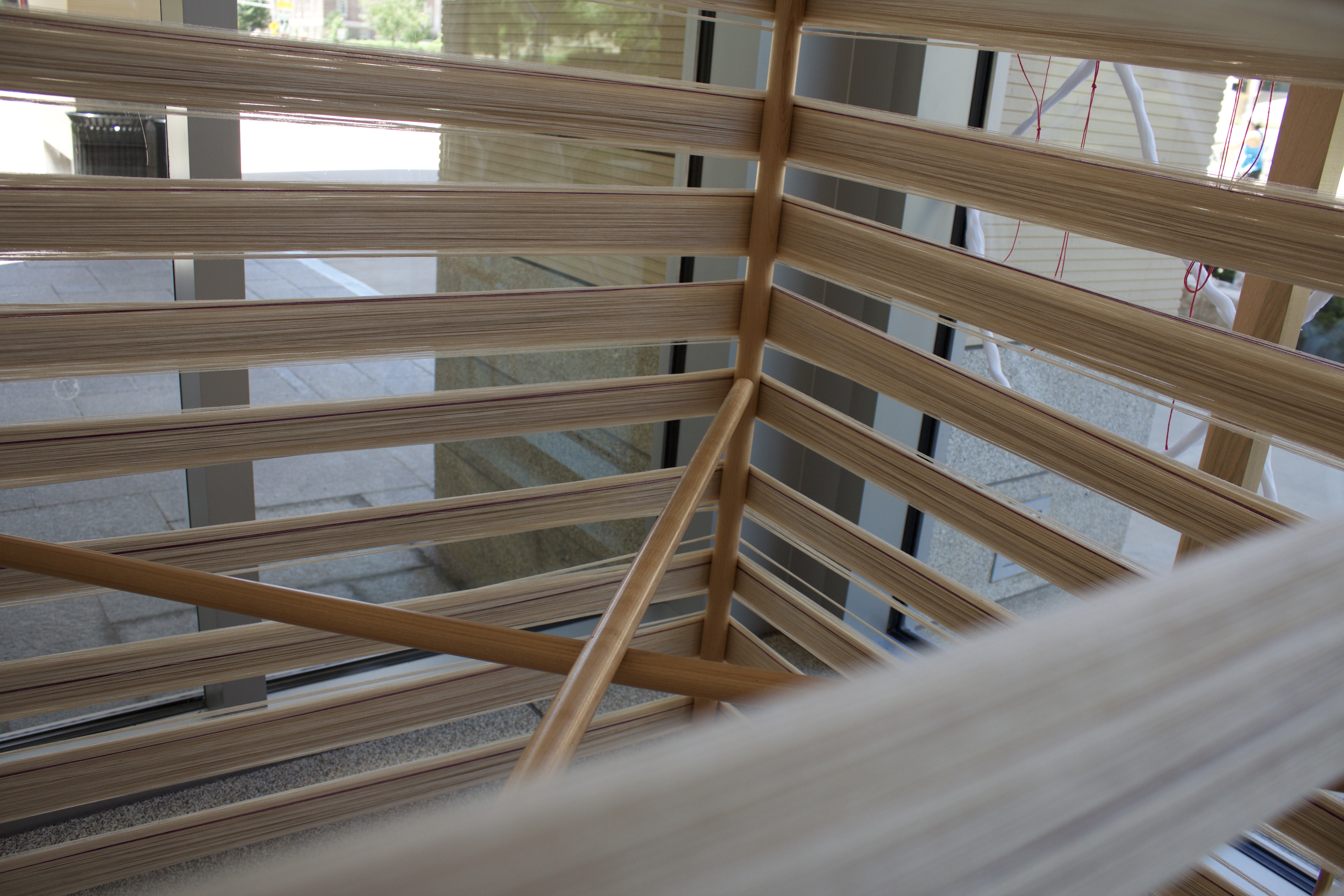 Back side of Loom 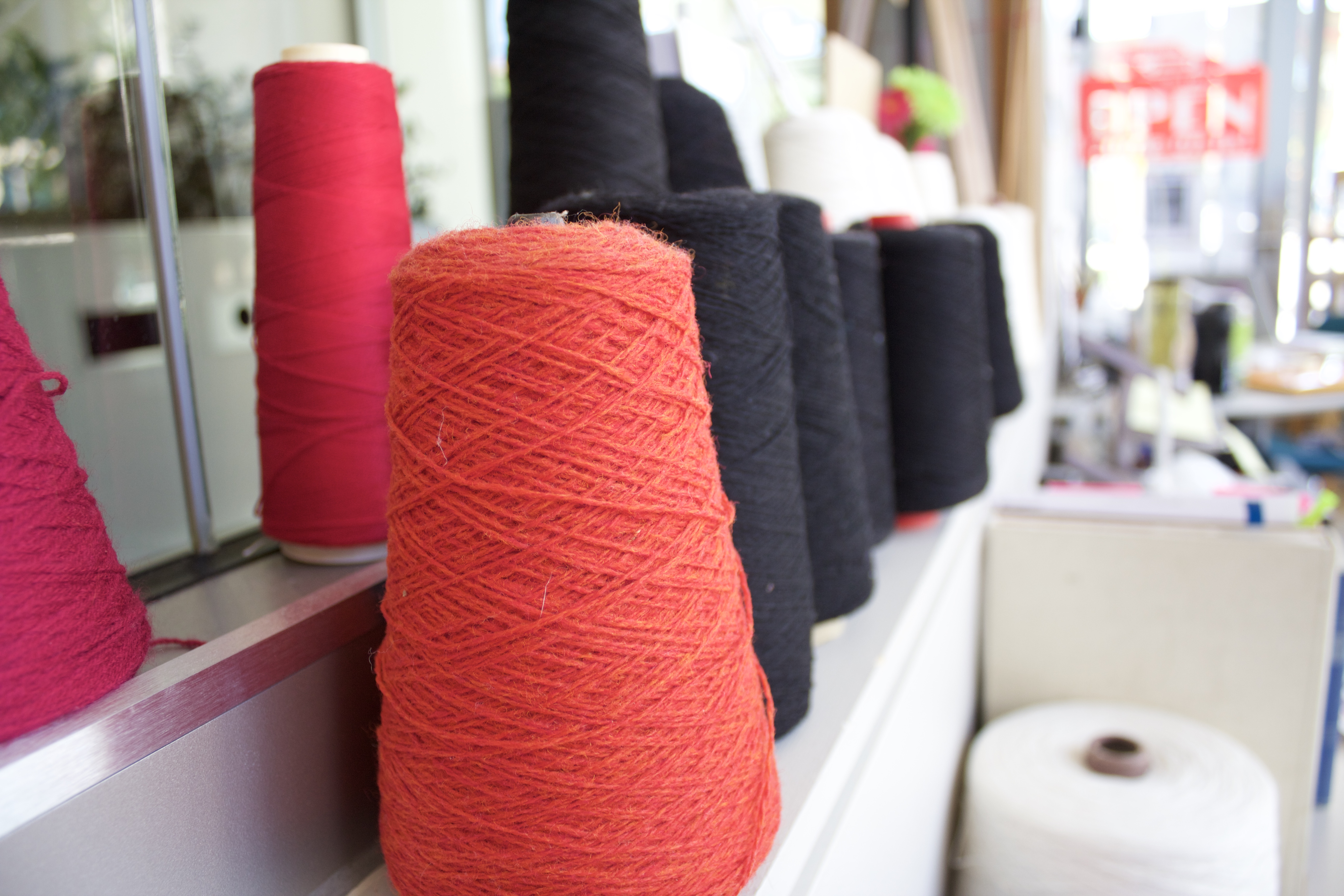 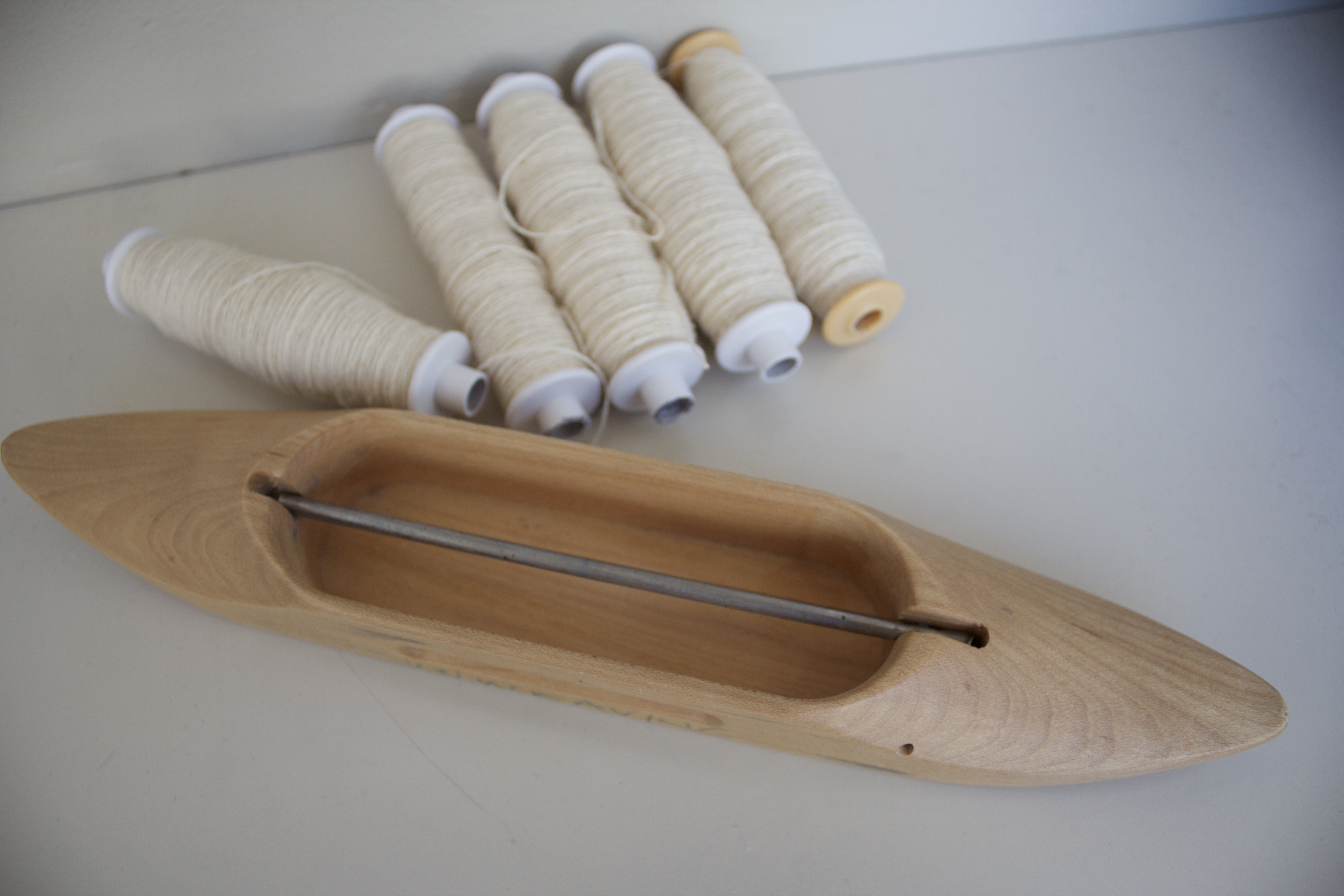 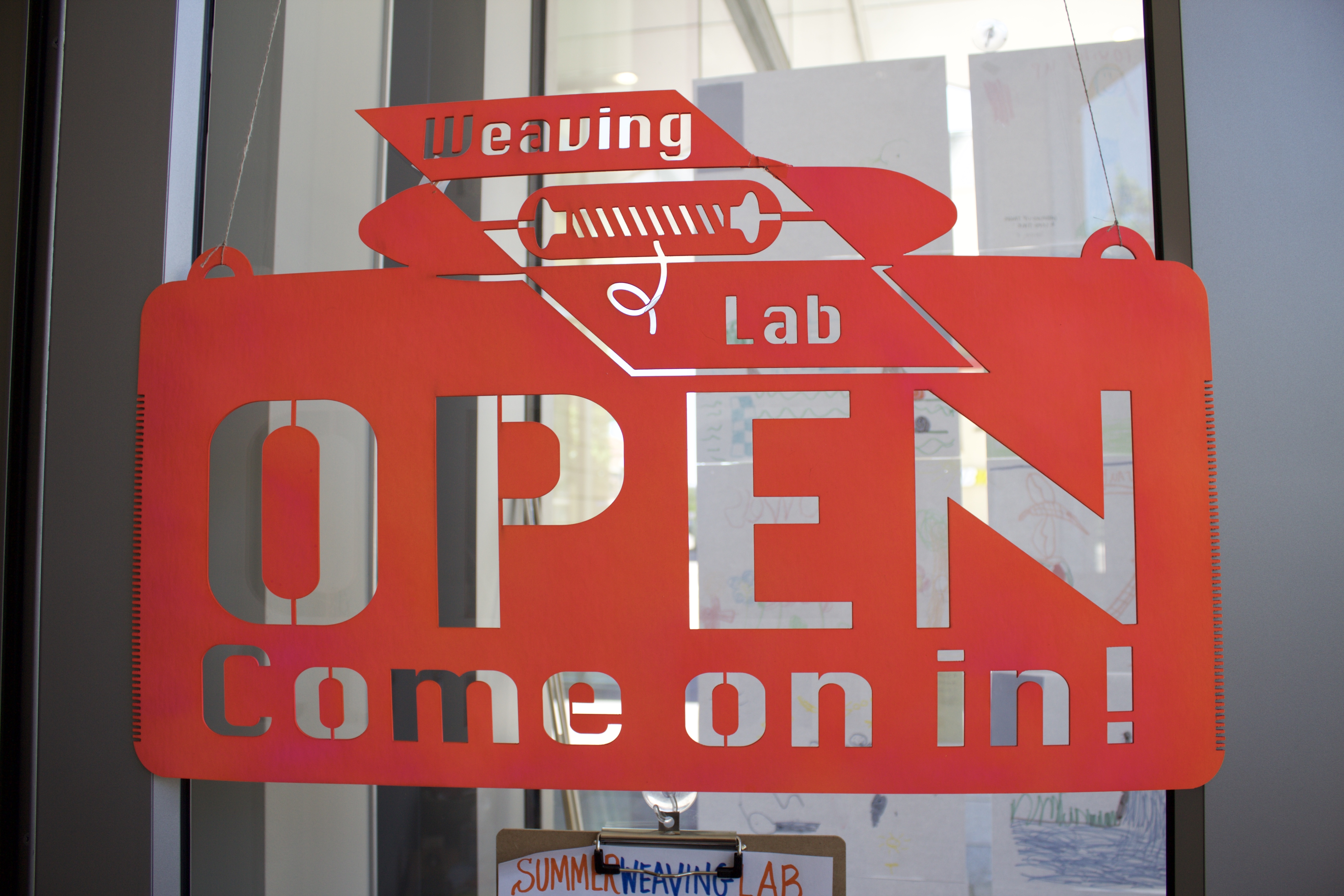 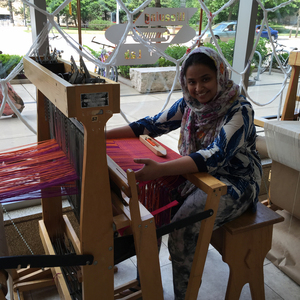 One of five looms in the Weaving Lab 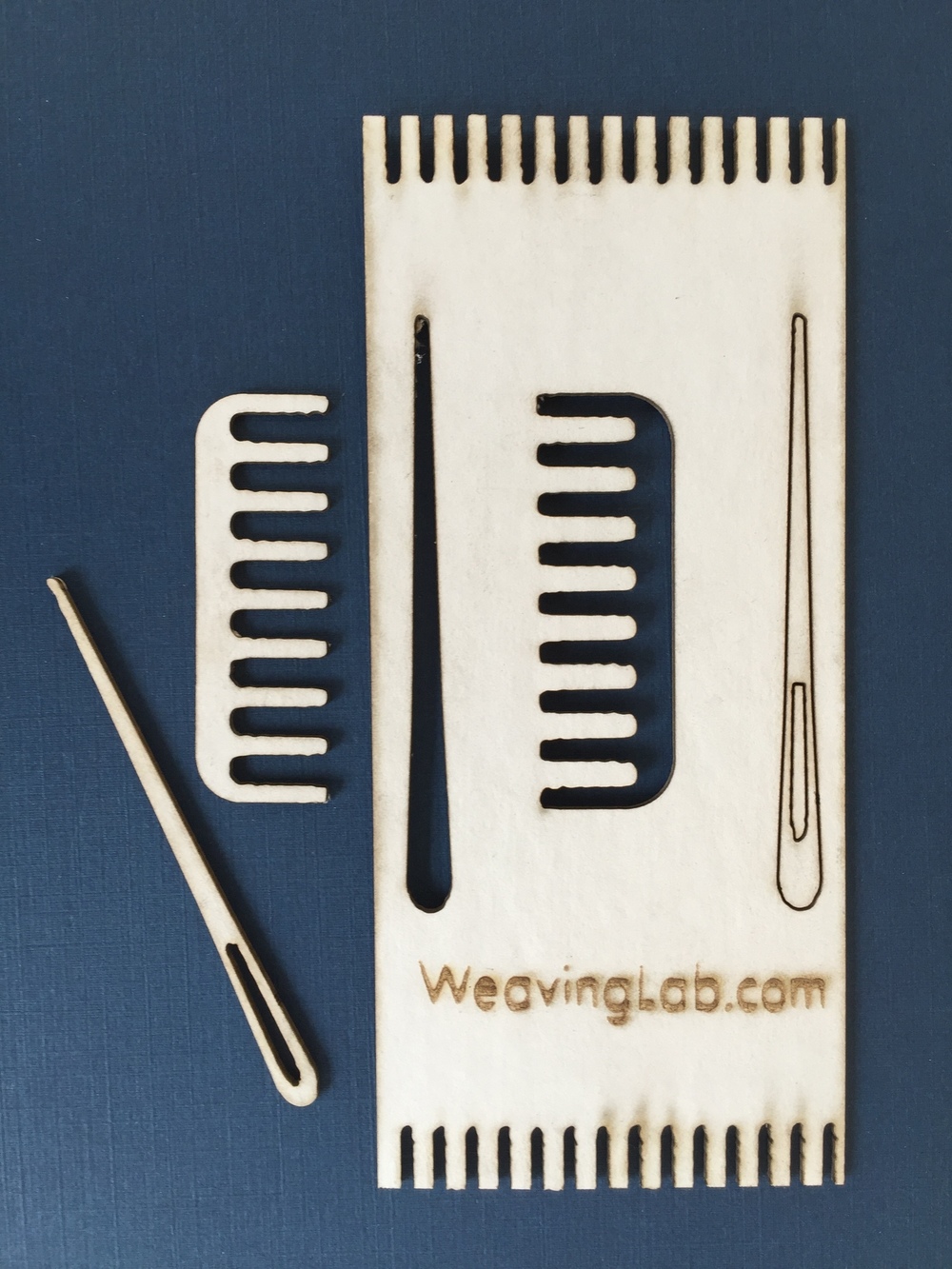 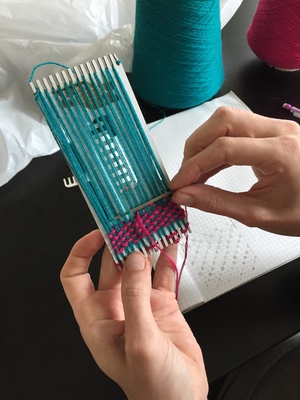 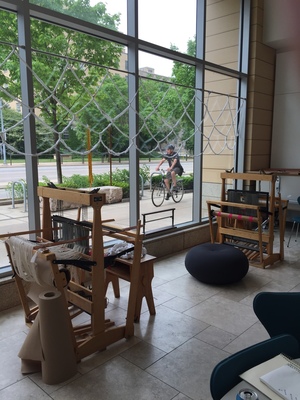 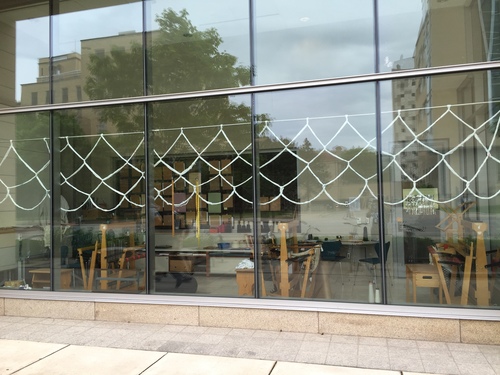