Researchers at the Wisconsin Institute for Discovery and the University of Wisconsin-Madison Center for Limnology are teaming up with natural resource agencies to use mathematical optimization models. The goal: to change the way resources are allocated and assist in the recovery of native fish in the Great Lakes basin.

In the Great Lakes basin, fish are in trouble, and one major cause may not be what you expect. Rather than the habitats themselves, the problem is connectivity between the habitats. Many of the fish native to the Great Lakes basin are migratory fish, meaning that they live out their life cycles in different habitats in different places. Walleye and lake sturgeon, for example, spawn upstream in tributaries while northern pike migrate to wetlands near the coast to spawn.

Humans have introduced a number of barriers to these vital migrations, most notably in the form of road crossings and dams. Barriers with low passability – that is, a low probability of being traversed by fish – result in thousands of miles of tributary habitat being lost to migratory fish.

Over the last few years, University of Wisconsin-Madison Center for Limnology professor Pete McIntyre and a team including researchers from UW–Madison, the Wisconsin Department of Natural Resources, and the Nature Conservancy have developed enormous databases that include the location, passability, and estimated removal costs of road crossings and dams throughout the Great Lakes basin. Amassing such large amounts of data is itself a great feat, but putting the data to use presents an entirely new challenge. 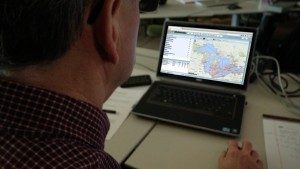 Agencies looking to restore native fish populations have limited budgets; it is only economically practical to remove a fraction of the barriers currently in existence. So how do you decide where to invest limited resources for barrier removal? Collaborating with McIntyre’s team, Wisconsin Institute for Discovery faculty member Michael Ferris and others in the Optimization theme at WID have put optimization routines to work guiding decisions about restoring Great Lakes basin connectivity. Using the power of mathematical models, optimization finds the most efficient answers to complex problems. In this case, the model takes information about barrier passability, removal cost, and habitat gain and generates portfolios for barrier removal that maximize return on investment. It can tell you which barrier’s removal will result in the greatest increase in fish habitat for a given dollar amount.

The key to translating the optimization model into real changes in connectivity and fish populations is getting the tools into the right hands. Steve Wangen, a postdoc at WID, is part of the team that has produced a web-based decision support tool for people at the U.S. Fish and Wildlife Service and other agencies to interface with Ferris’s optimization model. The goal, according to Wangen, is to allow those who are responsible for allocating resources to barrier removal to more easily answer the question, “given 260,000 barriers across this whole region, how do you determine which ones to remove?”

“Given 260,000 barriers across this whole region, how do you determine which ones to remove?”

The project is called Fishwerks, and it is being developed with input from the U.S. Fish and Wildlife Service to potentially change the way decisions are made about barrier removal. In the past, limited information forced agencies to prioritize barrier removals in simplistic and, in many cases, inefficient ways. Because of such limitations, cumulative passability could not be fully considered in barrier removal decisions. Access to the data from McIntyre’s team through Fishwerks is important progress in itself – users can view the barriers overlaid on a Google map and apply filters to barrier attributes like passability and removal cost to visualize subsets of the data. But data visualization is only the beginning.

With Fishwerks, local resource managers with minimal training can use the optimization model hosted at WID to find the best options for barrier removal for their budgets. “It really takes an interactive approach to find the solution that you need specifically,” says Wangen. The web tool created at WID is also very customizable; users can create scenarios tailored to their own needs, considering specific regions, budget restrictions, and fish species.

Fishwerks can help people working on projects at multiple levels – from individual streams, rivers, and lakes, to the watershed level, to the entire Great Lakes basin – to more efficiently decide which barriers to remove depending on available funding. The model is most powerful, however, when the number of potential barriers is large relative to the budget. In fact, McIntyre has used the model to find that for a cost of $100 million, the amount of breeding habitat for migratory fish in the Great Lakes basin could be doubled. This figure is staggering considering that although a $100 million budget is outside the means of individual agencies, it is well within the recent range of total spending on such projects.

Fishwerks also allows for improvement and refinement of the data assembled by McIntyre’s group. With a data set so large, inaccuracies are a certainty, especially as barriers change over time. Fishwerks thus has two ways to make sure that the best and most accurate information is available. First, if someone running the model through the web-based tool knows updated information about a given barrier or barriers, as those in the field often do, he or she can tweak the barrier attributes (passability, cost of removal) before running the model. Crowd-sourcing the database in this way allows the model to take into account new information provided by local sources. Second, certain administrators can take information provided by local sources and officially add it to the primary database, making the entire database more accurate and useful. “If there’s better information out there, we can add that to it,” says Wangen. This is especially important for keeping the database up-to-date as barriers are removed.

Currently, Pete McIntyre and the team at WID are working on getting the tool into the hands of the U.S. Fish and Wildlife Service and other agencies. As they train people to use the tool, they are also gathering feedback to refine and improve Fishwerks to better meet the needs of those who will use it. Present challenges include getting the right agencies and people to adopt the tool, deciding who “holds the keys” to officially entering new data into the model, and adding more data, especially about management of specific species and the risks of increasing passability of certain barriers that may allow the spread of invasive species.

The Fishwerks project represents not only responsible science, but also responsible investment. By enabling resource managers to maximize the increase in habitat per dollar of a given budget, the tool can change the way resources are allocated. For Steve Wangen, Fishwerks represents science done right: taking high level optimization research and putting it to use in the real world in a way that is accessible to non-experts in optimization. Wangen adds, “Fishwerks was a proof of concept that we can do these things. It fulfills that idea of making useful progression of science.”