Creating energy solutions for communities throughout the world poses serious challenges, but a group of undergraduates thinks its idea might be a bright alternative.

Called “Biobulb,” a light bulb driven by microbes in a self-contained ecosystem, the concept has landed a WID Frontier Fellows group in one of 24 slots in Popular Science magazine’s #CrowdGrant Challenge. The international contest, which runs from early July until Aug. 30, highlights the “biggest, boldest science and technology project ideas,” encouraging the public to crowdsource funds to bring participants’ ideas to life.

The team includes undergraduate students Alexandra Cohn, Michael Zaiken and AnaElise Beckman, majoring in philosophy, biochemistry and anthropology/neurobiology, respectively. Although each student brings a unique perspective to the transdisciplinary collaboration, the fellows — all in the university’s Biocore honors program — share a common goal to change the public’s perception of synthetic biology, a field that alters organisms’ genetic makeup to create a new application or use.

“We want our project to have a cultural impact,” says Alexandra Cohn, who’s a third year student studying philosophy. “Whether it’s providing people without electricity access to light, or overcoming perceptions that genetically modified organisms (GMOs) are bad, we hope people become excited about the potential for what synthetic biology can do. We want the Biobulb to serve as an educational tool to increase the public’s awareness about this rapidly progressing field.” 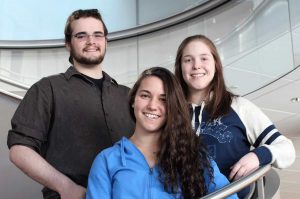 The group’s idea focuses on creating a self-sustaining ecosystem in a jar, consisting of several microbial species, each playing a role in nutrient recycling and population control. The ecosystem will require exposure to natural sunlight to provide energy to support the symbiotic relationships inside.

The success of the design, says Frontier Fellow and UW–Madison junior Michael Zaiken, depends on the group’s ability to modify the genes of a harmless bacterial strain to make it release stored energy in the form of bioluminescent light, a glow akin to what other animals such as insects and jellyfish emit in the natural world with the help of the chemical luciferin. For starters, the Biobulb team says the bulb will likely emanate enough light to serve as a night light or reading light in dark environments.

“This field is normally rooted in genetic engineering — the practice of artificially moving genes from one species to another or creating entirely novel pieces of genetic information,” says Zaiken. “However, synthetic biology can also involve creating or modifying whole ecosystems in order to produce a desired outcome. What most excites me about the field is its limitless possibilities.”

In addition to genetically modified bacteria, the Biobulb will include an algal species to trap photosynthetic energy and a predatory protist to recycle nutrients and keep the bacterial population in check.

With the financial support from the #CrowdGrant challenge, the fellows will experiment this fall in the lab of Systems Biology faculty member and Assistant Professor of Bacteriology Kalin Vetsigian, who studies the ecology and evolution of microbial communities, and can provide relevant expertise in microbiology and ecological modeling.

“We want the Biobulb to serve as an educational tool to increase the public’s awareness about this rapidly progressing field.”

During the experiment, the group plans to explore several questions, including how long the bulb can last as well as if there are triggers to the system that “turn on” the bioluminescence. For instance, the students will study whether exposing the Biobulb to specific temperatures or using certain chemicals can alter or better control the bulb’s performance. Based on previous research, the team says the bulb can theoretically last for several months to years based on the success of its methods.

The fellows say another important task is testing different approaches that prevent the microbes from mutating, or randomly changing their genetic characteristics, from one generation to the next.

Other research that explores bioluminescence in plants has contributed to the students’ understanding of the potential for the Biobulb and a larger discussion about the ethics behind genetic modification.

“Our goal isn’t to create a commercial product, but rather an artistic representation of science that will grasp people’s attention,” says AnaElise Beckman, a third year anthropology and neurobiology major. “We want to move beyond the stigma many times associated with synthetic biology and get people engaged in more questions about the real potentials of the field.”

Through WID’s Frontier Fellows program, the Biobulb team has been provided the space and mentorship to pursue this intensive project outside of the classroom.

“These students’ novel idea serves as a prime example of the interdisciplinary work that WID’s Frontier Fellows program was designed to stimulate,” says David Baum, Interim Associate Director for Students in the Institute. “It illustrates the creative potential of UW undergraduates.”

Visit the fellows’ RocketHub page to learn more and support the project.