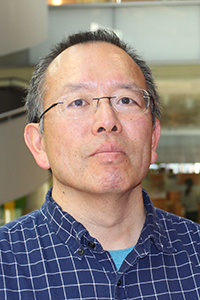 Forecasting of virus-host growth and infection spread; physical and chemical origins of life

John Yin grew up in the Maryland suburbs of Washington, D.C., studied in NYC and Berkeley, CA, as well as Germany, but he has now finally settled down with wife and two boys in Madison in biking distance to the University.

Viruses cause a diversity of human diseases including acquired immunodeficiency syndrome(AIDS), influenza, hepatitis, and cancer. The focus of our research is to develop new experimental and computational methods to better understand how viruses grow and how their infections spread. Our ultimate goal is to apply these methods to create more effective vaccines, design potent anti-viral therapies, and engineer useful viruses. We currently study human rhinovirus, which causes the common cold and promotes asthma in infants, and vesicular stomatitis virus (VSV), a virus that may be engineered to destroy cancers.

As the smallest organisms viruses range from 20 to 300 nanometers in diameter and carry genomes that encode from 5 to 200 genes. To grow, a virus must develop an intimate relationship with a living cell. After docking with receptors at the cell surface the virus enters the cell, releases its genome, and thereby sets in motion processes that ultimately divert resources of the cell toward the mass production of virus proteins and virus genomes. Self-assembly of these parts give rise to progeny viruses that, following release, may encounter and infect other susceptible cells. Despite the small size and relative simplicity of virus genomes, the network of molecular transformations that define virus growth within the cell remain complex. Thus it is a major challenge to predict how engineered differences, natural mutations, virus-targeted drugs or cell differences can influence how viruses grow.

Integration of diverse information. We address the complexity of virus growth by casting the molecular interactions in the mathematical and computable language of chemical reaction engineering, a process that enables us to weave together mechanisms and data drawn from biochemical, biophysical and genetic studies spanning the last 40 years. Through our model building we integrate themes of molecular synthesis and decay, template-directed information transfers, physical interactions and regulatory feedbacks, and macro-molecular assembly. Our models provide a functional link between static genomes of viruses and the dynamic processes of infection that they encode.

Nature versus nurture. Our genome-to-organism models of virus growth have opened the door to better understanding how interactions between virus genomes and their intracellular environments influence virus development. Specifically, we have shown that protein synthesis is the limiting resource for virus growth, quantified how interactions among genes contribute to virus fitness and robustness, and identified conditions under which wild-type genome designs perform optimally. On the applications side we have used these models to suggest novel anti-viral strategies that resist escape.

Challenging paradigms and taking risks. The modus operandi in biology employs average measures of molecular levels to elucidate mechanisms. However, in the study of viruses, where genetic variability can be rampant, such average measures can mask variations that are likely to be central to viral growth and persistence. We are beginning to address such issues by probing virus growth and host-cell responses at the single-cell level, using flow cytometry to sort and analyze single infected cells, computer modeling to test potential mechanisms, and novel experimental methods to visualize and quantify the dynamics of virus populations from single infected cells. In the process we are identifying and illuminating new themes and variations as the smallest genomes come to life.